Where God Goes For Salt 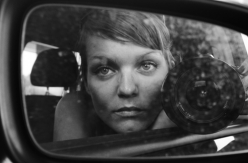 Photographer and photojournalist. Capturing reality in a compelling way without the photographer’s interference is her favourite field of photography. In the last five years she’s made journeys to developing countries documenting social issues. Among the most notable are her features about the problems of AIDS in Southern India, orphans living in the sewers of Odessa in Ukraine, the lives and the training of wrestlers from poor backgrounds in Senegal and The Gambia.

From the perspective of a satellite the volcanic lake in the El Sod crater on the border between Ethiopia and Kenya looks like a black eye staring out of the parched red landscape. Yet the satellite does not see the hundreds of people submerged in the black water, mining high quality salt here every day.

The journey around the crater rim takes one and a half hours, the descent into the crater forty-five minutes. The walk back up to the rim takes around one hour, and that is if you are in good shape. However, a stroll in the volcanic sand between the black cliffs is not the reason why dozens of the residents of the South Ethiopian village called El Sod (literally “House of Salt”) wind their way down the narrow path to the crater floor every day. The two-kilometre descent takes them to the black lake with a diameter of several hundred metres and which conceals a deposit, several dozens of metres thick, of culinary gold: salt. The shallow water is so saturated with salt that within a matter of minutes the miners’ black bodies become animated alabaster statues.

The relationship between the miners and the salt water is bittersweet. Although it harms them and takes their lives, they know that they cannot live without it. They would like to escape, but they have neither the means nor anywhere to go. A return to the pastoral lifestyle their fellow tribesmen lead is practically impossible, because they would need too much money to establish their herds and gain the necessary respect. Neither can they find employment elsewhere, as they only know who to do one thing, and do it well – mine salt. Even after sixty years of working every day in the boke, Momino still puts salt on his dinner. “I simply like salt” he says with a smile.

I dream of travel and when the opportunity to go to Cairo presented itself, I was all over it, even if it was only for a few days. I feel this was the preview to a much longer visit in the future. View This Gallery
To The Top
Close