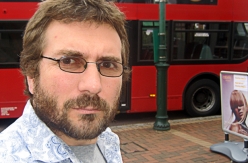 Philippe was born in Marseille in 1971. After two years as a school assistant in the South of France, he moved to Sydney, Australia, in 1990. In 1998 he relocated to Dublin, Ireland, where he completed a three years degree in Photography, at the DunLaoghaire Institute of Art, Design and Technology. He has been living in London since January 2004 where he completed a Post Graduate Certificate in Education at the Institute of Education, London University. Over the last 15 years Philippe has travelled to and photographed in over 60 countries. When he is not teaching art in London's secondary schools, he is working on a large photographic project about the African Continent: The Other Africa.

“Troops in Mauritania oust the government”, “Guinea turmoil threatens lucrative mining deal”, “Dumped computers cause toxic concerns in Ghana”, “ANC supporters warn of blood in the streets”, “The Niger Delta: The curse of the black gold”… another normal day in Africa, viewed from the Western Media. Africa suffers from a ‘deficit of image’: where Africans see the West mostly through Hollywood movies, we, in the West, only hear about Africa through depressing media headlines.

There is no denying that Africa faces many issues, but all the positives coming from the Continent are never reported on. This Afro-pessimism hides many encouraging news. African economies grow at rates far higher than in the West, boosted by high commodity prices. Many countries (France and the UK, the two main former colonial powers, but also the United States and China) have a renewed interest for these lands.

The Other Africa is a photographic project aiming at giving a new vision of the continent. The project is articulated around three main themes:

From the rural communities of Dzanini, close the border of Zimbabwe, through to neighborhoods of Khayelitsha in Africa's southern most city, the informal barbershop and hair salon play an important part in township life. These businesses are a place where getting your hair cut or styled is sometimes an afterthought. - Simon Weller. View This Gallery
To The Top
Close