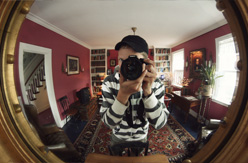 I am a PhD candidate in History from Frankfurt am Main, Germany, focusing on history in Africa. “Growing Up in Fetraomby” is a collaborative photo series by members of the 'AK Madagaskar', a group from Germany which is supporting the Madagascan NGO Mitsinjo in the field of healthcare (http://akmadagaskar.vcp-nds.de/). AK Madagaskar visited central and eastern regions of the country in October 2010 to get in touch with actors on site and prepare a documentary film on everyday lives of children and adolescents.

Once again it was a political crisis that brought Madagascar to the attention of the world public. However, events such as the attempted coup and the arguable constitutional amendment of November 2010 hardly have direct impact on the daily routines of most Malagasy, who live in countryside communities far-off from the capital. This photo series calls attention to everyday experiences in rural Madagascar by focusing on a small village, Fetraomby, and the normal course of life of a particular part of its inhabitants: children and adolescents.

Fetraomby is located in Madagascar’s eastern Toamasina Province and has a population of about 500. Since it cannot be reached easily overland, the most important route connecting the village with the outside world is the Rianila River. The closest larger town, Brickaville/Ampasimanolotra (population of about 30 000), can be reached by motorized boats in about 5 hours. Rafts and pirogues supply Fetraomby with everyday commodities such as tooth-brushes, soap or soft drinks, but rapids and shallow water limit the logistics chain.

Fetraomby is an agricultural community, and many children and adolescents are actively involved in field work and subsequent processing steps. At age 6 to 15 years, they visit the local school where at present 6 teachers are instructing 6 classes. Aiming for a higher qualification means leaving Fetraomby, since secondary schools such as a boarding school in Toamasina are not within easy reach. School fees make such efforts even more difficult.

The material conditions under which children grow up are rather basic: Water is obtained from wells or the Rianila River, electricity is – if at all – only available for a few hours a day and houses are normally illuminated with candles. There are a few shops offering elementary consumer goods such as food or clothes, and a few TVs and cell phones can be found in Fetraomby. This situation must not necessarily be perceived in terms of deficit. However, the limited access to resources turns out to be a problem in many areas of life – for example, when surgical procedures at the small medical clinic have to be conducted in candlelight. In Fetraomby, at the margins of the capitalist world-economy, becoming adult typically involves the experience that one’s own skills and efforts can hardly improve the material standard of living. Thus, the structural conditions limiting the future prospects of children growing up here deserve more attention than momentary political turmoil.

My story is a very simple one: The story I want to tell is one about a small community of local people living in "Stone Town", a World Heritage site located on the Swahili Island of Zanzibar. View This Gallery
To The Top
Close