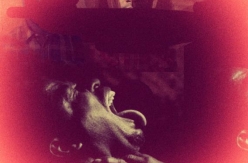 I run a well equipped studio in Osu, in the heart of Accra but most of my photography is done on location. I mainly focus on Africa and so far have shot (still photography and directing and producing video) for corporates, NGOs and magazines in Cameroon, Uganda, Angola, Nigeria, Mali, Senegal, Gambia, Cote D’Ivoire, Liberia, and Ghana. My work has been exhibited in Europe, Africa and America. My clients include: Orica, Endeavour Mines, Marie Stella Maris, Nestle, CFA Institute, Olam, The Guardian, Geo France, The Financial Times, Getty Images, BASF, Nike, Arise Magazine, FIFA, IFAD, CARE, ActionAid, WaterAid, The Global Fund, Novartis Foundation, Vodafone and Philips. I live in Accra with the love of my life, Gloria and our three lovely children.

Democracy is a pathetic belief in the collective wisdom of individual ignorance.

Elections in Ghana has a certain level of civic engagement which contradicts the apathy the ordinary citizen feels about everyday politics. Perhaps, it is the realization that for this one time, every single vote counts regardless of who is casting it, barring any anomalies. Campaign rallies are festive occasions, sometimes taken to the extreme and bizarre with fancy and comical costumes, all in good fun.

However, the festive atmosphere belies the importance of Ghana's 2012 elections, which is being used as a barometer of the maturity of democratic processes and institutions in Africa as a whole. Somewhat unfairly, it is being used to gauge whether Africa as a whole is beginning to rid itself of autocratic and dictatorial leadership, amid failed political systems. Ghana is expected to have a smooth and problem free election, with seamless transition of power if the opposition wins (or conversely, with a swift and peaceful concession of defeat from the losing party). It is unfair because even in countries with advanced democracies, elections are fraught with problems, ranging from faulty voting machines, disenfranchisement of classes of citizens to even allegations of downright election rigging. Anyone around during the Bush vs Gore debacle in Florida? How long did it take them to tally all votes and come out with an official set of numbers?

As of this writing, the Electoral Commission of Ghana has declared the incumbent president, John Dramani Mahama, the winner of the 2012 elections. The opposition has not conceded, alleging anomalies and requesting a recount. What does this mean? Has it been a failure and does it reflect on what's going to happen in other African countries in a similar exercise of democracy? Of course not! As U.S. President Barack Obama recently told the U.N General Assembly, "True democracy … is hard work". Churchill, recognizing the imperfections of democracy said "Democracy is the worst form of government except all those other forms that have been tried from time to time."

Africans should not be held to any higher standards. Of course, I am not advocating mayhem or maintenance of the status quo. 55 years after independence, amid all the adverse internal an external factors impacting the practice of democracy, Ghana has certainly made progress. If democracy is hard, then we will go through our own turmoil, however, the process goes on, imperfect or not. We strive towards our own "perfect union" of tribes, factions, ideas and people. Every election strengthens the process and allows us to get closer to a truly democratic and free society. However, African leaders must be committed to the pursuit of democratic governance, transparency, accountability and rule of law. They cannot and should not be allowed to derail the process whenever their self interests seem threatened.  This election is important to Ghanaians because it ensures that people have a say in their own future.

Many thanks to Nana Kofi Acquah, a photojournalist based in Accra for contributing these pictures. They can also be found on his blog.

Lutte Duppedrongofrillo (fr. for Traditional Wrestling) is the name used to describe related styles of West African Folk Wrestling, known as Laamb in Senegal, Boreh in The Gambia, Evala in Togo, and KoKowa / Kokawa in Hausa areas of Nigeria and Niger, or simply Lutte Traditionnelle, in Niger and Burkina Faso. View This Gallery
To The Top
Close